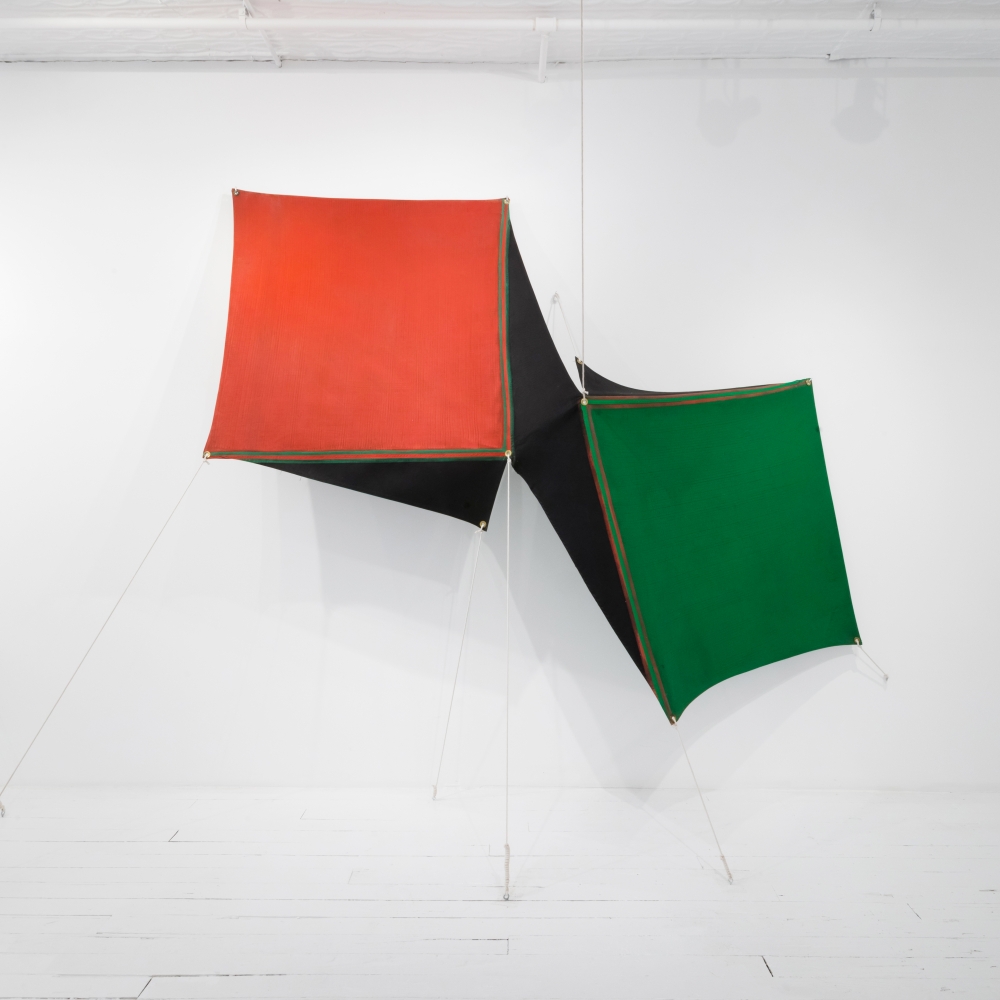 Joe Overstreet’s experimental paintings from the early 1970s were made to be suspended from ceilings and tied to floors using a system of ropes and grommets. As a result, they occupy a good deal of three-dimensional space, and by design their shapes change every time they are installed, depending on how they are stretched out, draped, or crumpled. In some works, such as St. Expedite II and Untitled, both 1971, and Untitled, 1972, Overstreet has painted squares of canvas in solid colors-red, green, navy blue, deep purple-edged in contrasting stripes. Other works, such as the enormous Boxes, 1970, play with vibrant patterns of geometric abstraction but, at the same time, appear haunted by the ghosts of earlier, more figurative gestures.

Others still, such as Purple Flight, 1971, are splattered with fast-flung drips of paint. Taken together, the fifteen paintings and six works on paper in this exhibition looked like the sails of a ship, kites, flags, or the flaps of a nomadic tribe’s tents. Such evocations and associations swirled around a dense matrix of further allusions— expressed in titles as well as in statements by the artist and the curator, Horace Brockington—to the histories of slavery and lynching in the American South, to free jazz and the Harlem Renaissance, and to the spiritual uses of objects and visual idioms in West African, Islamic, and American Indian traditions. The effect was a welcome whirlwind, unsettling established histories of who has made what kind of art, and why.

Overstreet has been a cultural fixture in New York’s East Village for forty years. In 1973, he and his partner, Corrine Jennings, opened Kenkeleba House, an art space on East Second Street, and through a steady program of exhibitions and community initiatives it has sustained an entire history of creative practice otherwise ignored by the mainstream art world. Overstreet isn’t a native New Yorker. He was born in 1933 in a corner of rural Mississippi that was predominantly African American and Choctaw. As part of the Great Migration, he and his family traveled by caravan with seven others to the West Coast. He grew up and went to art school primarily in the Bay Area. His early mentor was the artist Sargent Johnson, known as both a modernist and a synthesizer of wide-ranging, often ancient cultural influences. His later mentors and friends included the painter Willem de Kooning, the poet Ishmael Reed, and the notably eccentric musician Sun Ra.

In 1958, Overstreet moved to New York and made friends with a gang of Abstract Expressionists who hung out at the Cedar Tavern. Some of his best-known paintings—such as Birmingham Bombing, 1963; The New Jemima, 1964; and Strange Fruit, 1964–65—hover between abstraction and figuration while responding to traumatic historic events with immediate force. In the late 1960s, however, Overstreet began moving away from direct political engagement in his paintings and toward more formal innovations regarding how artworks fill space. Like many artists of the time, he pulled his paintings off the wall and abandoned stretchers and frames. But the language Overstreet developed in the early 1970s—in and around the constructed canvases that make up the “Flight Patterns” series, 1970–72, which formed the core of this exhibition—was both universal in its intimations of flight, mobility, and freedom, as well as deeply personal.

Overstreet has often said that he was thinking of the nomadic years of his early childhood when he began making these paintings. He wanted to come up with a format that could easily roll up, pack away, and travel. These works may accommodate such compactness and mobility, but they are no less majestic when strung up and put on display. Moving around and under sails, stepping gingerly over ropes, one senses not so much the presence of a painful past as the possibility of growth and change. “I’m not interested in finding myself,” Overstreet once said. “I’m interested in building myself.”